Renewing the Senate Under the Section 44 Amending Formula

Parliament has the ability to modernize aspects of the Senate without needing to resort to constitutional amendment. In this article, the author highlights some archaic provisions of the Constitution Act, 1867that could be updated without altering the Senate’s fundamental nature. These changes would arguably allow the Senate to better reflect contemporary Canada.

The Liberal government, elected in 2015, has chosen to renew the Senate by means of a one-step non-statutory reform. The change is limited to making only non-partisan, merit-based appointments and accompanying adaptations. All other features of the Upper House’s antiquated constitutional foundations continue, even though many of them serve no public purpose.

END_OF_DOCUMENT_TOKEN_TO_BE_REPLACED

All Together Now: Government Bill Bundling in the 42nd Parliament

Bill bundling – the reintroduction of all the substantive provisions of a bill without any modification in another bill – has been used on several occasions by the government during the 42nd Parliament, 1st Session. In this article, the author notes that this method of packaging a legislative agenda is somewhat unusual and warrants further consideration from a legislative planning perspective. He explains that while combining or consolidating related matters into one bill maximizes efficiency, the introduction of government legislation carries with it a myriad of legal and practical consequences beyond the Senate and House of Commons, some of which are heightened when bills are bundled. The author suggests that the recent trend of bill bundling is linked to recognition of the limited time in the legislative calendar before the next scheduled election. However, if bill bundling becomes a more common practice in future parliaments, some questions about predictability and consistency of a legislative agenda should be considered.

END_OF_DOCUMENT_TOKEN_TO_BE_REPLACED

Inclusive and Diverse Leadership in Parliamentary Politics and Beyond

It’s undeniable that there are systemic barriers which prevent certain people from fully participating in society. Inside and outside of parliamentary politics, there has been much discussion and debate about the kinds of barriers women face. In this article, the author explores how a tendency for women to take on caregiving roles for children, and increasingly the elderly, is one such barrier to full participation – particularly for caregivers who are single. She writes that parliamentarians can and should lead by example by finding creative ways to eliminate these barriers in their own organizations and professional development activities. END_OF_DOCUMENT_TOKEN_TO_BE_REPLACED

Temporary Special Measures: A Possible Solution to Get More Women Into Politics

In some ways, the Legislative Assembly of the Northwest Territories has been a trailblazer in terms of diversity of representation in Canada. Since full responsible government returned in 1983, a majority of its MLAs have been Indigenous, as have all but two of its premiers. Moreover, Nellie Cournoyea became the first Indigenous woman to become premier of a province or territory in Canada and only the second woman ever to hold a premiership in the country. In terms of electing women to the Assembly, however, it has lagged behind many other jurisdictions. Currently only two MLAs are women (10 per cent of the Assembly) and since 1999 the Assembly has only surpassed this number of women MLAs once – three (or 15.8 per cent in 2007). In order to become a more representative body, the territorial Assembly unanimously adopted a motion to ensure at least 20 per cent of MLAs are women by 2023, and at least 30 per cent of MLAs are women by 2027. In this article, the author explains the concept of temporary special measures to achieve this goal. She outlines the experience of Samoa, another small jurisdiction with Westminster roots in which women were substantially underrepresented in parliament, to demonstrate how the NWT might reach these benchmarks. She concludes by noting that temporary special measures are one way of increasing women’s representation in assemblies, but others may work as well depending on the jurisdiction’s political culture and institutions. END_OF_DOCUMENT_TOKEN_TO_BE_REPLACED 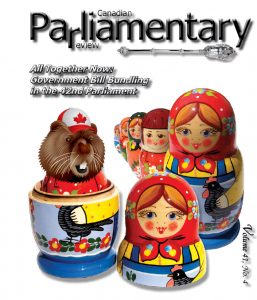 Know Your Mace – The House of Commons

The House of Commons cannot convene without its Mace. On February 3, 1916, when fire ravaged the Parliament Building, the original Mace was lost. In the immediate aftermath of the fire, the House used the Mace belonging to the Senate and then that of the Ontario Legislature until a temporary wooden Mace was fashioned. The Lord Mayor and Sheriffs of London, upon hearing of its destruction, commissioned a replacement. A new Mace was crafted by the renowned Goldsmiths and Silversmiths Company Ltd. of London. It is similar in design to the House of Commons Mace at Westminster and is made of sterling silver with an amalgam of gold and mercury. As the Mace was commissioned during the reign of George V, the Royal cypher GR was placed around the vase-shaped head. This cypher was altered in 1953 and replaced with ER for Her Majesty Queen Elizabeth II. The new Mace was presented to Prime Minister Robert L. Borden on March 28, 1917, and first used in the House on May 16, 1917. The wooden Mace was kept and since 1977 is used when the House sits on February 3 to commemorate the anniversary of the fire. END_OF_DOCUMENT_TOKEN_TO_BE_REPLACED